I am a big shoot ’em up fan (or shmup for short). Aircraft have always been amazing to me, so whenever I was young I wasted no time playing any sidescrolling shmup that I could get my hands on. From arcade shooters to console games, I was always playing them no matter what.

With the rise in popularity of the switch and the revival of classic arcade shooters, I figured it would be fair to be the one to play them all and compile a ranking! Of course, this ranking will take a lot of time, as I will be tackling each game individually with a mini review.

So let’s see which is the first game in the list:

Among the Arcade releases, this is the one I remember playing first when I was young. I didn’t play the arcade version, but I did spend a lot of time playing the SNES version. The one thing I remembered the most is the dolphin pilot and the shooting star ninja. 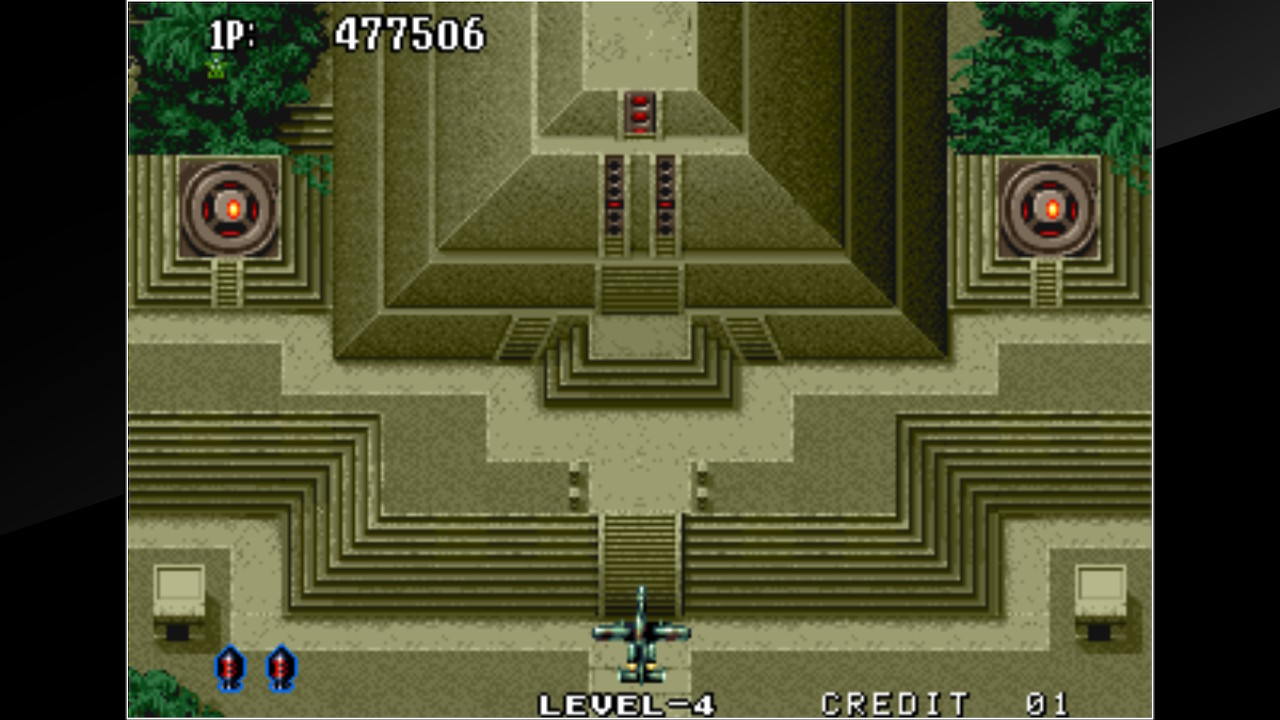 There isn’t much to say about the gameplay. Aero Fighters 2 plays as a vertical shmup. You only have 2 buttons: shooting and bombing. While the controls might seem simple, they do make for an experience that is easy to pick up.

If you are unfamiliar with the ACA Neogeo series, then you should know that you can tweak a bunch of settings. From the get go you are presented with a menu which lets you play as either the Japanese or American release, play caravan or high-score mode. 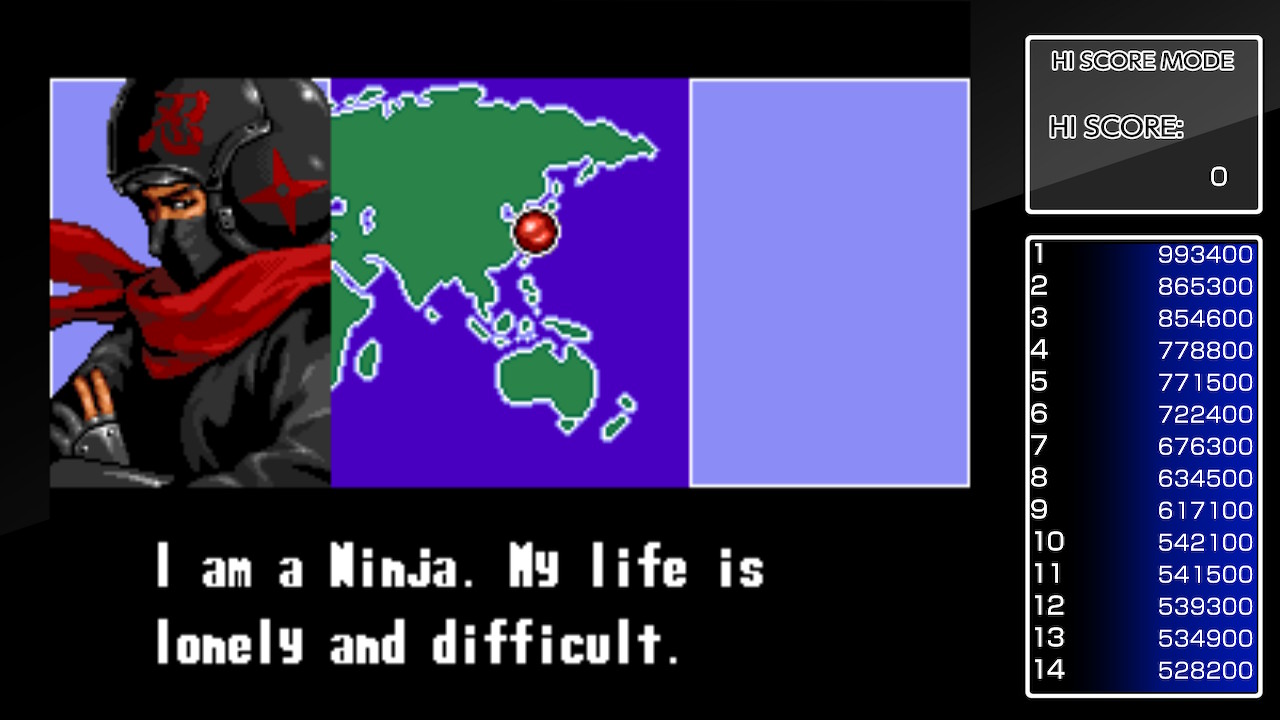 While inside the game you can also customize a bunch of arcade setting. I gotta admit that it is very highly customizable. You can change things like the game difficulty, the filters, set wide-screen, set a background, box the screen, number of points before you gain an extra life (extend), reset or continue when you left off from game overs, etc. You can even limit the number of continues if you are looking for a much greater challenge or even attempt 1 credit clears.

The difficulty is true arcade challenge. I don’t necessarily mean this as a positive, because we have to judge it in the context of arcades. To summarize, the game is designed to kill you and get you to spend more coins. Unlike modern shmups, your hitbox is much bigger and your move speed much slower. Power-ups are lost on death and might take a while to get back. The enemy patterns also start simple, but end up being very fast and hard to react to (and much harder to dodge due to your slow ship speed). The best phrase I can use to describe the difficulty is “predictably unfair”. The enemy patterns have their openings, but without previous knowledge you will probably die. 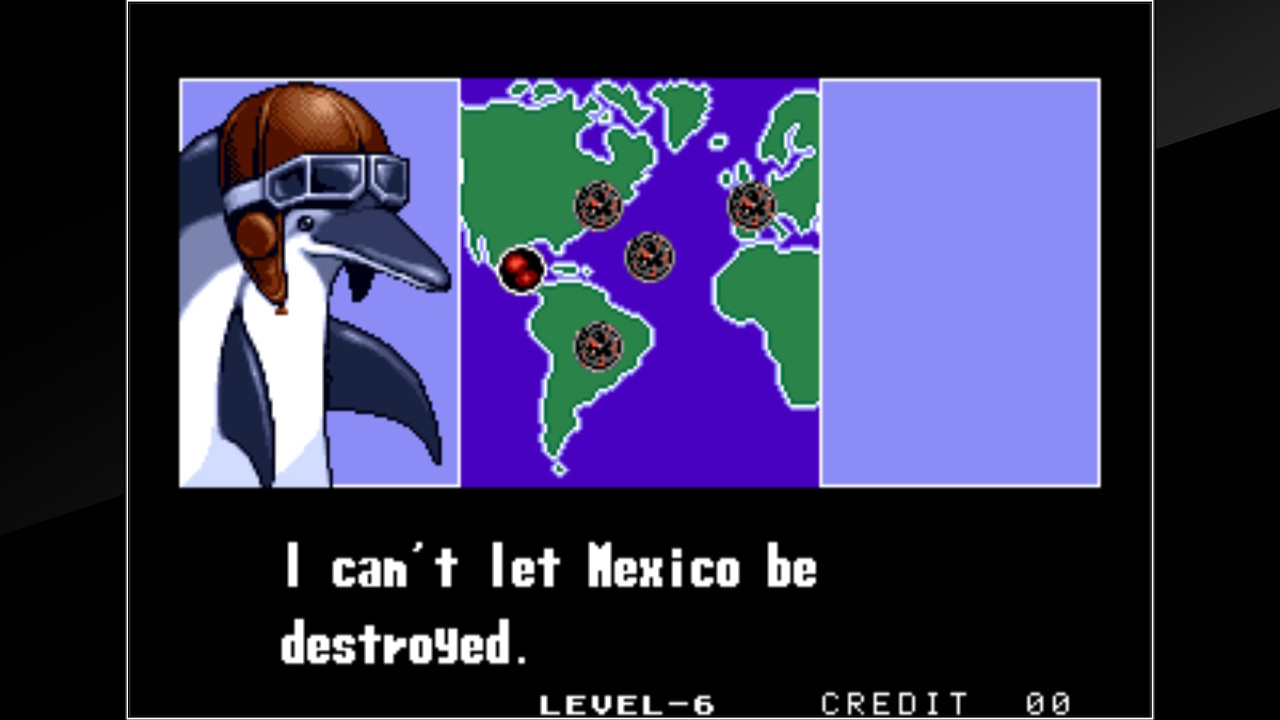 What I love the most about the arcade shooters is how perceivable the enemy damage is. As enemy ships take damage, they start glowing increasingly red. This tells you that they are dying, and also doubles as an urgency notification that you should finish off the enemy soon (for your own safety). The terrain is also highly destroyable, so spamming the shoot button is encouraged to destroy buildings and find score tokens.

The bosses take the damage up a notch. Boss fights have always been huge highlights for me, and among boss fights the shmup ones are definitely my favorite. Beating bosses is not just about reducing their hit points to 0. Beating bosses is about destroying them part by part, progressively disabling their guns, limbs or even their movement. You don’t only see one enemy getting progressively red, you see an enemy whose individual part take individual damage and the end result is a beat down of epic proportions!

The music in the game is ok. The songs are nothing fancy to remember, but they do serve their purpose of providing ambience for the mayhem. The boss theme really took me off-guard. Modern boss themes are about pumping up the player and setting the scene to be a memorable struggle between player and enemy. The boss theme in Aero Fighters 2 evokes a sense of urgency, it basically tells you to kill the enemy fast.

Overall Aero Fighters II provides a solid shmup experience. The game doesn’t pull any punches, and clearly wants you to insert some more coins. Luckily the coins are unlimited and the game as a whole becomes much more enjoyable. I honestly don’t see myself pursuing a 1 CC because of how outdated it feels compared to modern shooters. But I do enjoyed the game enough to make it a game I could play on chill evenings.