Continuing my quest for the greatest shmup, I came across a relic of my past. I’ve had emulators for as long as I can remember, and my Xbox had the MAME with literal thousands of games. Out of those games there was one whose name always caught my attention, simply because of its similarity with Papa Roach’s song: Last Resort.

I booted up this game multiple times in the past, but for some reason I don’t have any memories of it past the first level. I pondered upon this fact for a long time and decided the only way of solving the mystery was by playing it again. I did solve the mystery and remembered why I had so few memories: Game is very hard. 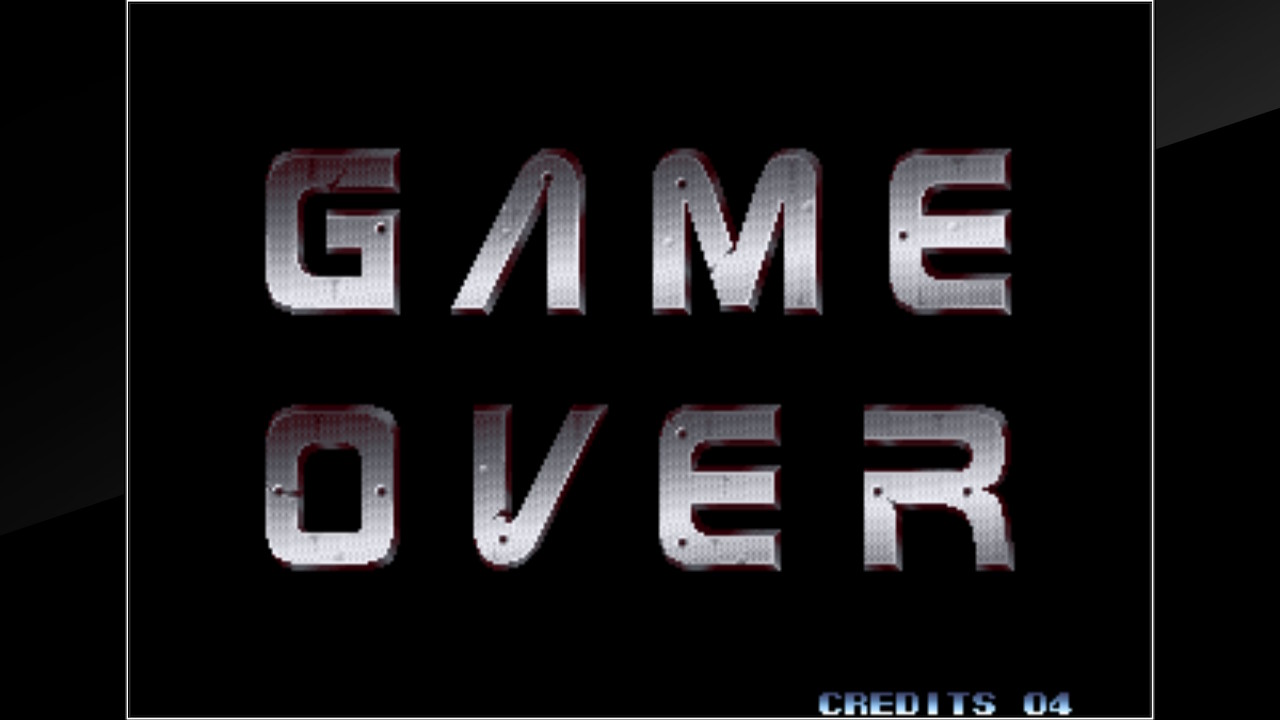 Unlike Aerofighters, Last Resort is an horizontal shooter. That is to say, action goes from left to right. You go around collecting power-ups and an orb to aid you. The game really is on the simple side when it comes to upgrades, limiting it to a couple of weapons, the orb and speed up/down upgrades.

If I were to draw a parallel to another game, I’d say Last Resort is very similar to R-Type. Of course, I kind of am giving the game a favor because it is heavily inspired by it. Ship design, the mechanics of the orb, even the space levels draw heavy inspiration.

The orb is perhaps my favorite and least favorite element in the game. The orb will always orbit in the opposite direction you are moving. If you move left, the orb will position on your right side. Move down, and the orb will stay up. You can also press a button to lock the orb in place while you move freely. The orb does contact damage and also disappear bullets, so it can be your shield or you can throw and have if be your offense. Each stage requires careful manipulation of the orb to survive.

It is pretty good and all, but the orb also has a huge downside: It is really slow. When I think about it, I wish its movement was faster so that I can block in all direction like a pro. Instead I can be shot from the top and the button, but there is absolutely no chance of having the orb do the necessary orbit to shield me. Most of my frustration with the game comes from trying to re-position my orb in the harder difficulties, only to die in the end. 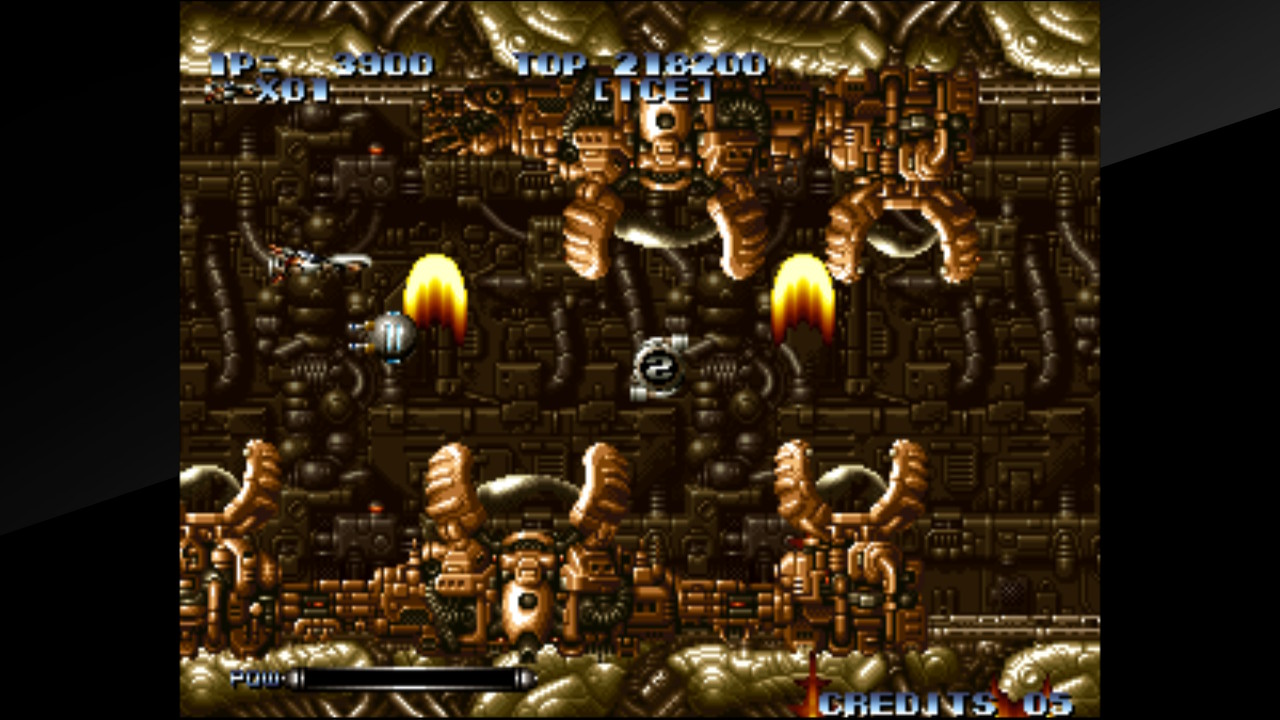 When I say the game is hard, I do mean that beating a level will take actual skill. Your infinite wallet will take you nowhere, because your ship dies in a single hit and you restart from your latest checkpoint. In this regard the game keep mimicking R-Type, however thanks to the orb I felt the difficulty as a frustrating endeavor. If you couple the sluggish orb with a very old-school horizontal hitbox, then you have a recipe for disaster.

A horrible side-effect of the difficulty is that the game becomes extremely tedious due to repetition. This might be the speed runner in me talking, but going through the same section a bunch of times is boring enough as it is, and when you throw in auto-scrolling levels, then you can see how hard it becomes to stomach. 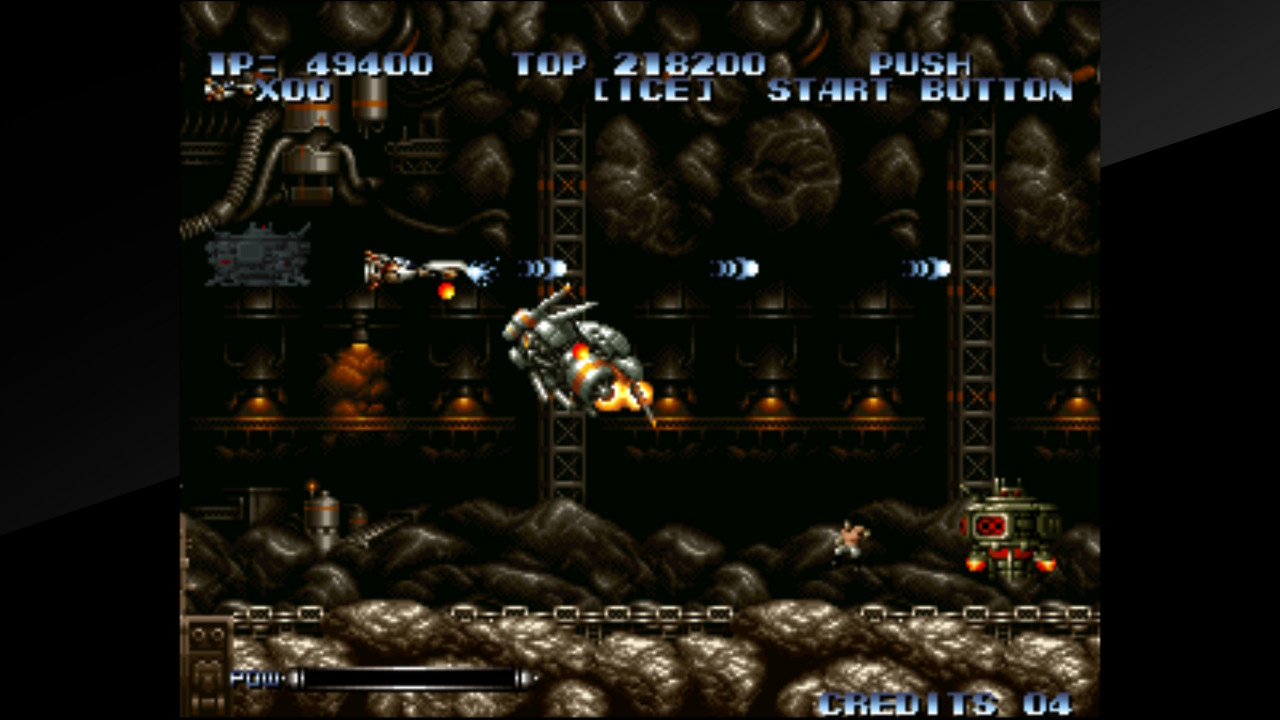 One of the many disadvantages of losing a life, is that you respawn without power-ups. The orb is pretty much mandatory, and at least one speed-up is required to maneuver the enemy fire. Luckily there are power-ups spawns after every checkpoint, but should you miss one of them, then your best course of action is to suicide and try again.

The setting of the game is pretty cool though. The story is that there was a computer virus that is waging a war against mankind, so most of the scenarios involve a post-apocalyptic view. It is always very exciting to traverse these war-turned battlefields.

The design of the bosses themselves is pretty noteworthy as well. Giant robot and huge alien organisms are part of the package. The boss fights make me wish there was some sort of boss-rush mode, but that wasn’t the norm in 1992. I do think that the bosses sometimes feel pretty underwhelming. The fragile nature of your ship means that enemy encounters can’t drag on for too long, and some bosses felt like they died way too fast.

The music is pretty fitting for the setting of the game. I wouldn’t say any particular song stuck out to me, but they all felt appropriate.

Should you be brave enough to complete the game, you will be rewarded with the second loop. The second loop offers a greater challenge, with a promise of a true ending at the end. The second loop is pretty hard, I barely made it to the last level and last checkpoint before the boss got me so many times. I had to cheese the final fight with a second player because I was credits away from just throwing my switch to the wall. 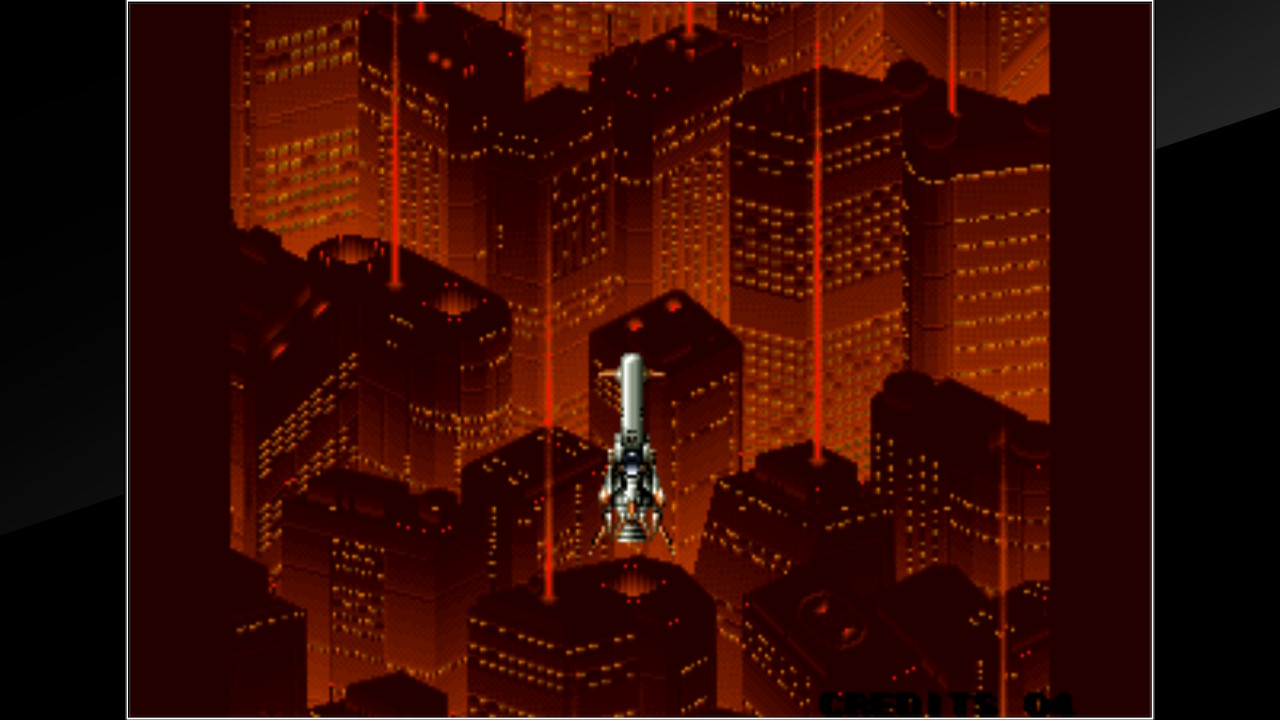 On the last shmup review I was asked for 2 elements in Aerofighters: TATE mode and auto-fire. TATE mode is available, not that it has any actual use in a horizontal shooter though. Going TATE will make everything much smaller, so I heavily advise against it. For the auto-fire, you can adjust the controls to enable it. Having auto-fire will disabled the charged orb throw, so I wouldn’t advise it either.

I really wanted to like Last Resort more, but the truth is that it wasn’t that enjoyable to me. I probably would have had an entirely different opinion if the game allowed me to continue after each death from the same spot. I do understand the inclination to disallow it, however, when you go for such unforgiving difficulty, it is hard to enjoy yourself unless you are very skilled at the game. I did like the gameplay and would love to replay every stage, but I probably won’t do it.

Up next: Steredenn: Binary Stars