As much as I’ve enjoyed covering those classic arcade shmups, I’ve been dying to review a more modern approach to the genre. It’s hard to say which one I love more, as someone who was born into an arcade era but also appreciate the refinement of the genre. In the end I can only say that I want to play both approaches equally as much.

Shikhondo – Soul Eater is the first modern shmup that will be featured in this list, and will mark the beginning of a convergence between the old and the new.

Shikhondo is a vertical shmup which embodies the shift in the genre into bullet hell/high score fiestas. If you are expecting a game with complicated bullet patterns and an emphasis in grazing bullets and maximizing high score windows, then this is definitely the game for you. 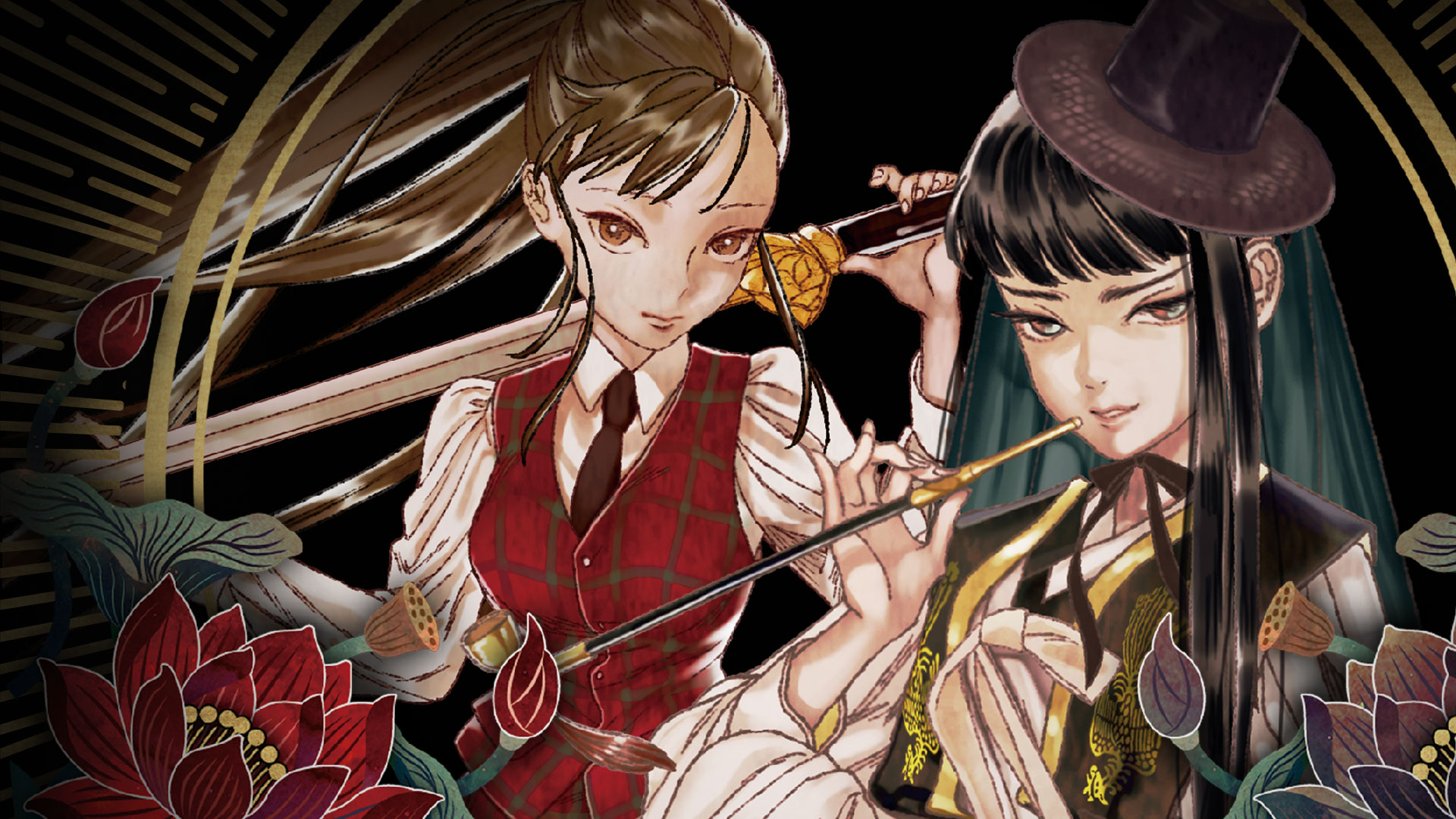 In Shikhondo you play as 1 of two girls as they make their way through the five stages. Each will feature a particular japanese motif and hordes of enemies which lead the way to a massive boss encounter at the end.

Before I embarrass myself I’ll say that I know next to nothing about japanese folklore, so apologies if I misinterpret something.

Everything sounds so familiar with previous shmups so far, but I’d like to expand on why I mention the shift into modernity.

The biggest difference you will see in the levels is the shift into survival stages. If there is anything that previous entries in the list have in common is the fact that each stage marks an evolution from a base ship/fighter into a more fearsome force via different power-ups.

Shikhondo ditches all those elements in favor of pure skill. You start at max power, which lets the focus shift from trying to acquire as many power-ups as possible into trying to survive the waves of enemies while racking up huge scores. Dying doesn’t hurt as much because you don’t need to worry about recovering your strength. 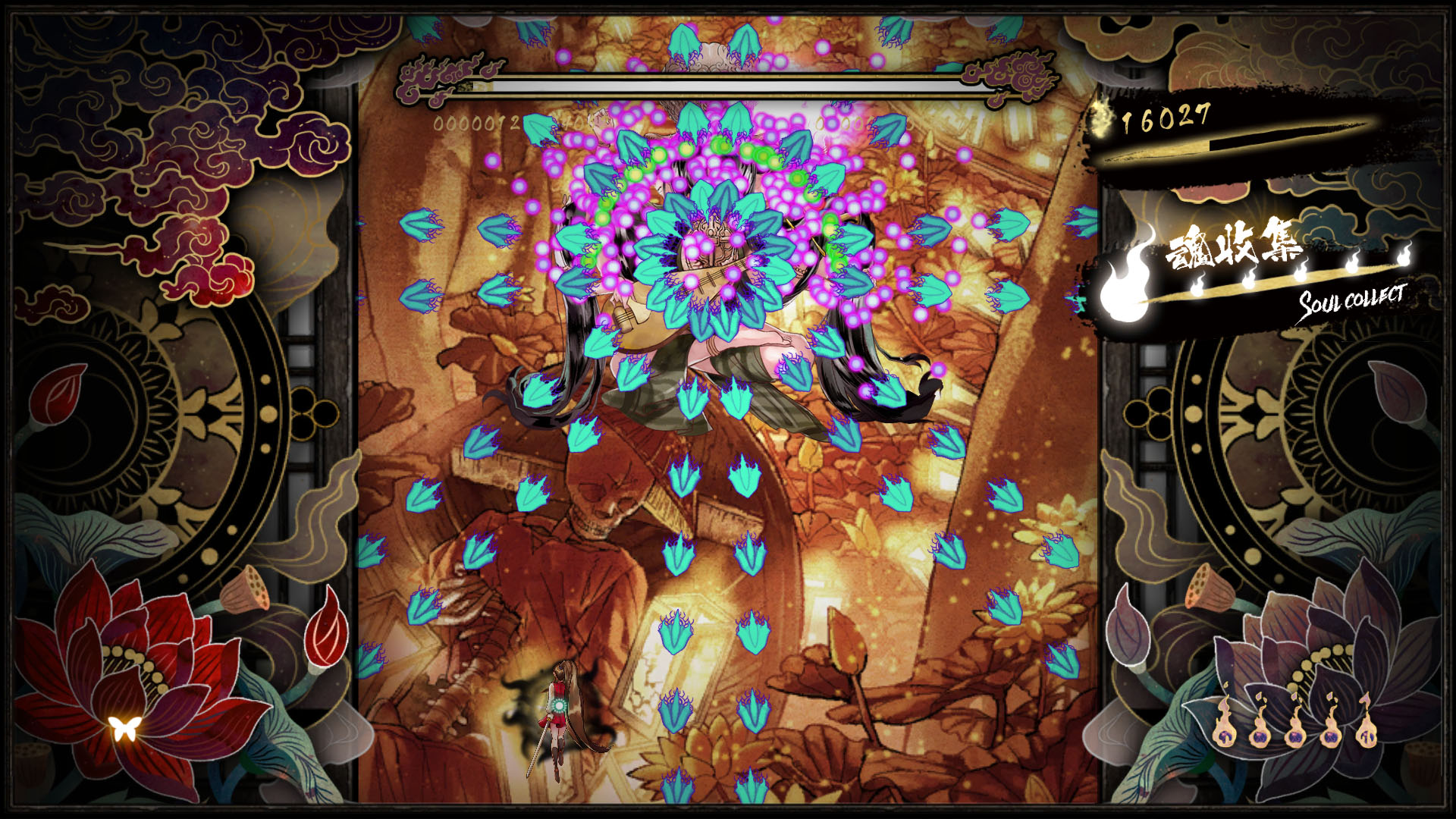 Being at full power from the beginning sounds like something that would eventually become boring, so this is where the Soul Collect comes into play! Most modern shmups offer incentive by keeping you close to the danger. Shikhondo embraces the very popular “graze” mechanics which increases the Soul gauge by being very close to bullets.

Overpowered from the get go

Graze enough bullets and you can activate Soul Collect with the bomb button. I’m not 100% clear on the effects of Soul Collect, but from what I’ve noticed you get increased souls by defeating enemies, their bullets also become souls when defeated. I believe there is also a damage increase but I could be wrong. What I can confirm is that entering Soul Collect is a pseudo bomb that wipes the bullets from the screen by converting them into souls and also unleashes a powerful wave attack on the enemies.

I’m not gonna lie, I have a huge crush on mechanics that make you feel temporarily overpowered. Just seeing everything turn yellow and seeing the Soul Collect message makes me feel fuzzy on the inside. 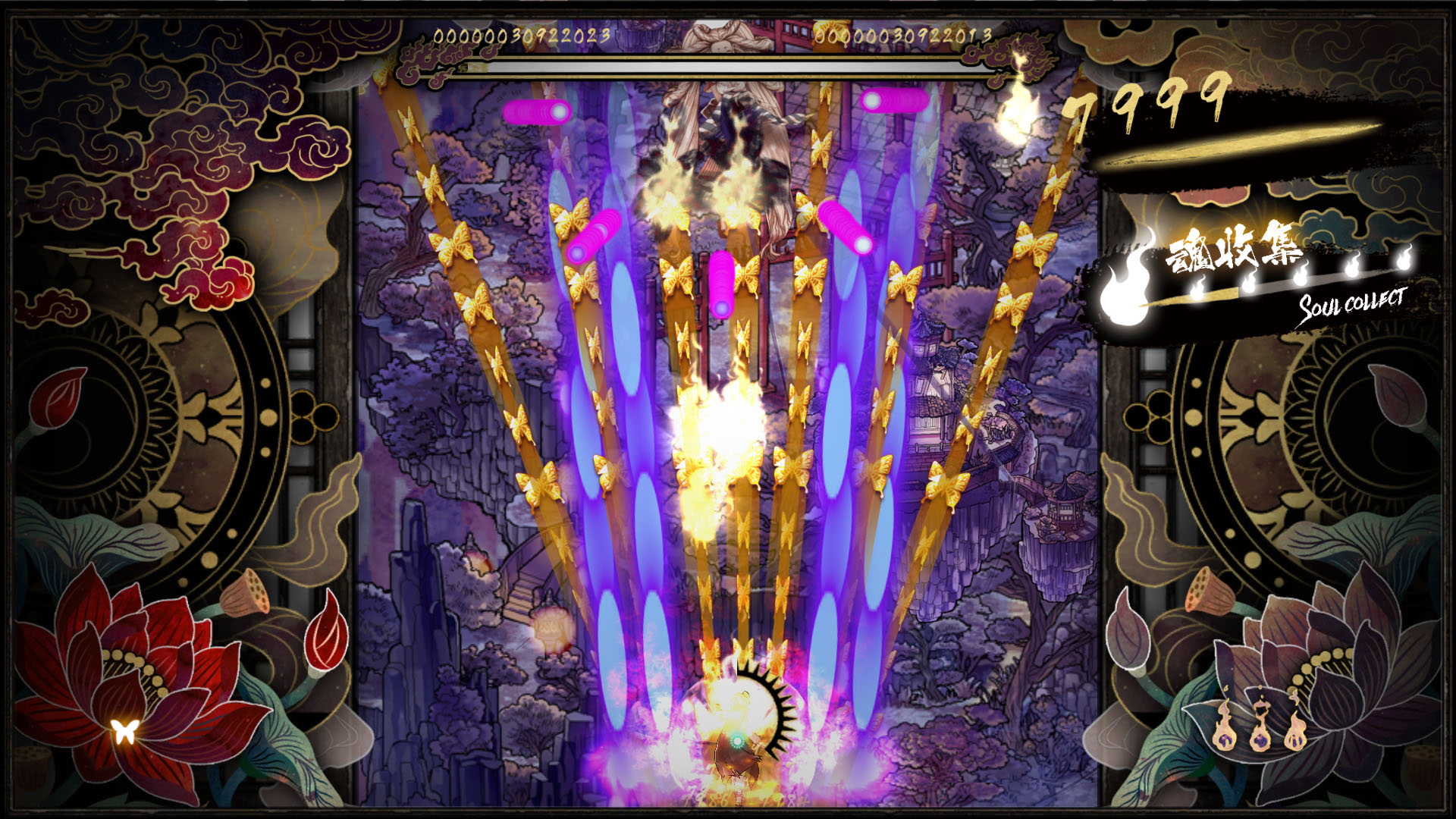 Soul Collect sounds pretty strong, but you can further strength it by using a bomb while Soul Collect is active! Doing so will reset the duration of Soul Collect and also unleash a second and stronger wave attack. There might be stronger versions of the Soul Collect bonuses, but it is very hard to say and even harder to try and count a score difference while trying not to die a tragic death.

Not reinventing the wheel

If all of this sounds very normal by modern shmups standards, it’s because it is. One of the things I love about Shikhondo is that it doesn’t concern itself with trying new mechanics or inciting a shmup revolution. Instead it offers its own “skin” for the genre and ends up creating a personality of its own.

A very popular conception is that shmups are extremely hardcore games, but I don’t find it to be the case. I just spent an afternoon watching a Dragon Ball FighterZ tournament and I was very pleased by how much playtime I could squeeze between matches. The levels have the perfect duration and Shikhondo is pretty chill to play in short bursts. The game is by no means easy, but its infinite continues allow me to play at a relaxing pace. I won’t be breaking any high scores with such a carefree style, but I’ll certainly be having a lot of fun.

I would heavily advise AGAINST playing in the toilet. The “one more stage” urge is strong in this one and it may or may not be unhealthy for your colon.

Actually, this doesn’t only apply to the toilet. While watching the tournament, I also found myself missing some matches because I wanted to finish a stage (or many) before getting my attention back to the tourney. Any game that absorbs you in that way is pretty amazing to me. 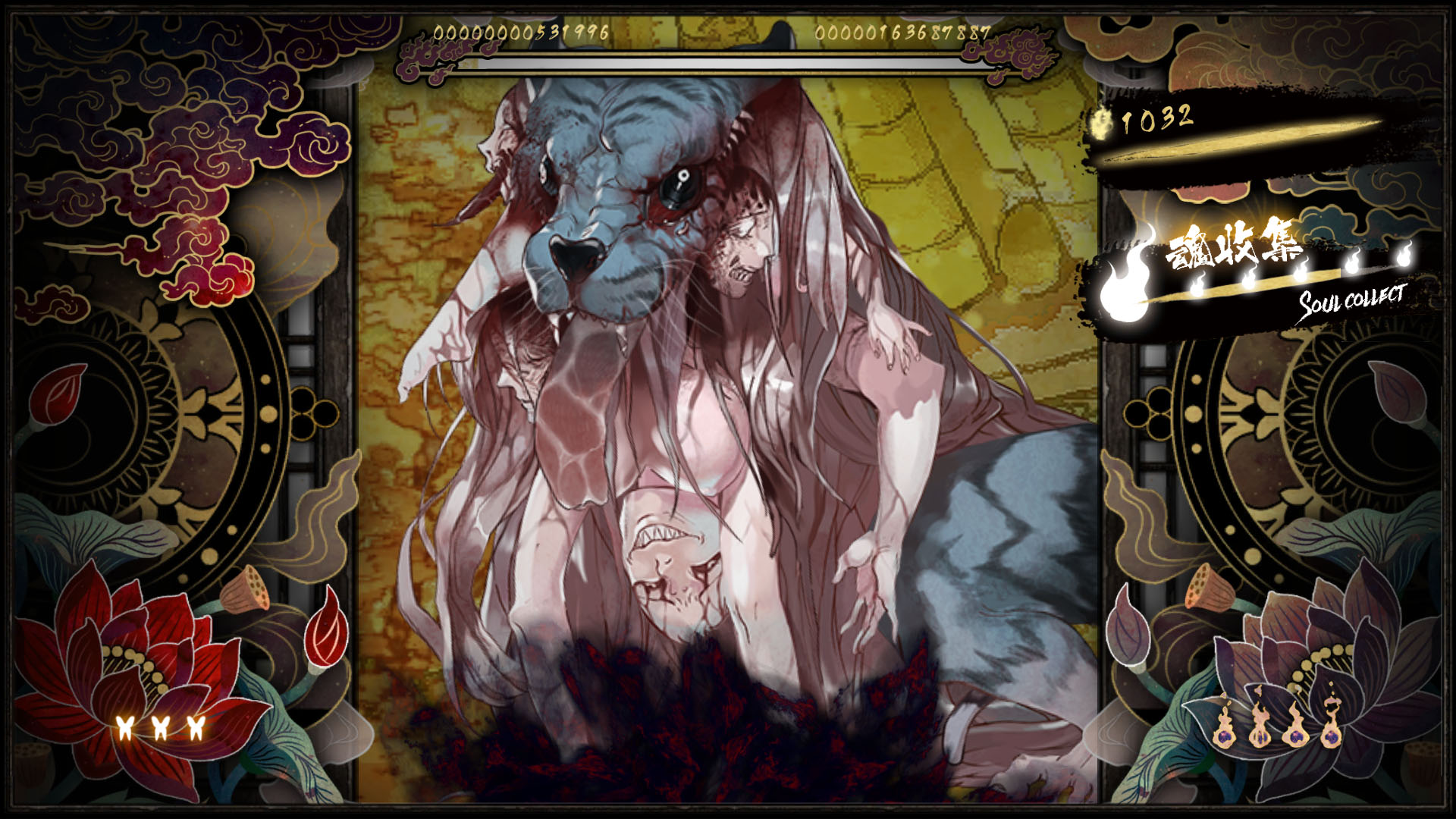 Another thing that sets the game apart is the japanese Yokai motif. There is a lot to love, but I want to give a special mention to the bosses. I’ve said on numerous occasions that I’m not a fan of the “waifu” culture. I find most waifu games to be quite distasteful. This is not the case for Shikhondo. I might be pretty oblivious to cultural references, japanese isn’t my strong suit, but I appreciate secondary forms on my bosses, and the horrible monsters these ladies become is a perfect mix of scary and exciting.

Before I stop talking about the looks, I have to give a shoutout to the level background. They feel like beautifully drawn landscapes in a scrolling… scroll.

Sadly, the visuals are also the culprits behind my biggest complaint of the game: the bullets. With all the beauty the game has, it fails to give a distinctive look to the bullets that are on-screen. It is very common to make enemy fire brightly colored and with very marked outlines, but Shikhondo features bullets that are mostly red and semi-blend in with the background. 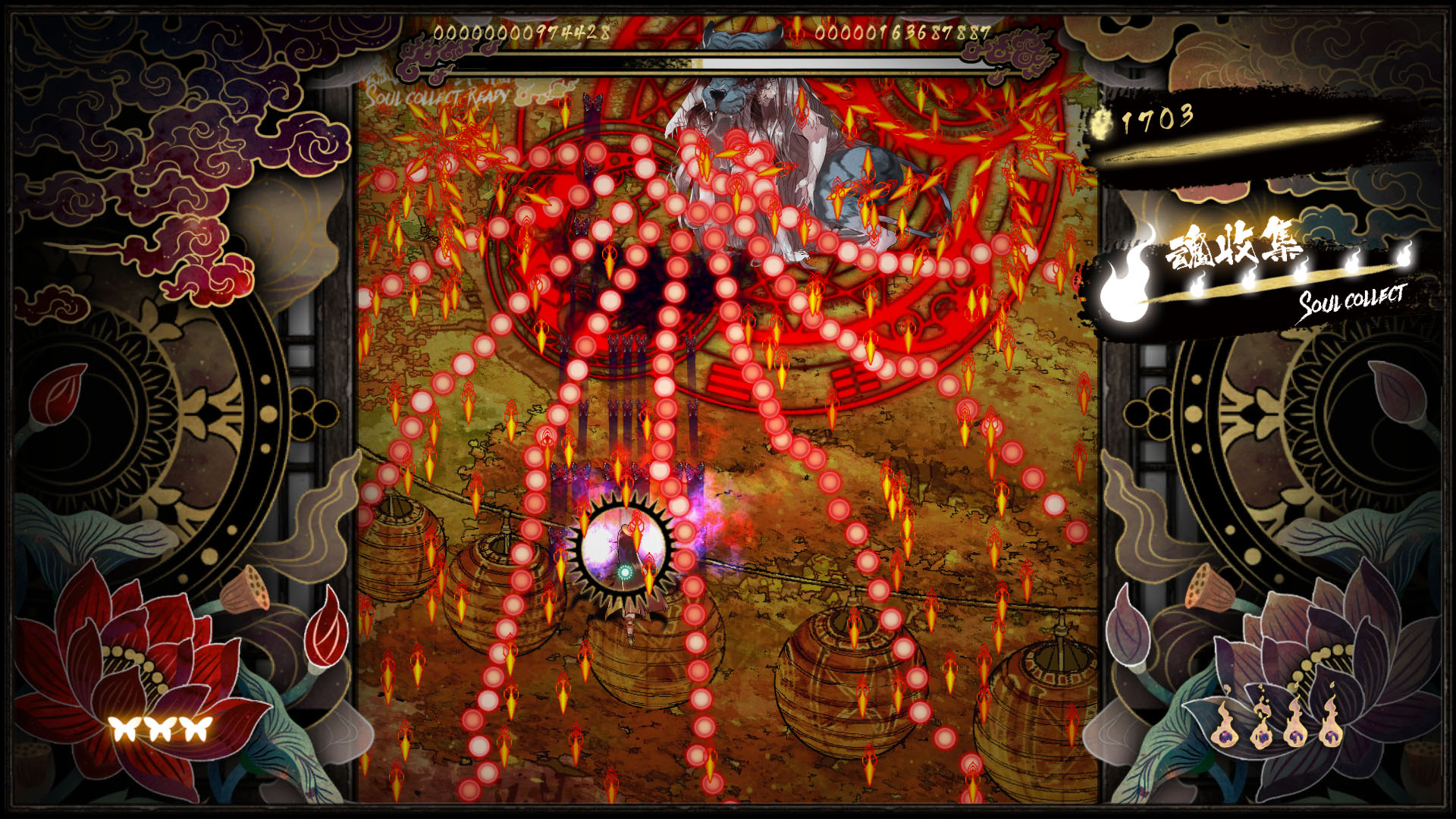 You’d be correct in assuming you will sometimes die to a bullet that you didn’t even see, and it might frustrate some people. Time makes it more manageable, but only because memorization always has a strong place in shmups.

No rest for the weary

Shikhondo also does very odd things when the game is paused. Animations play out while the game is paused and sometimes the bullet patterns continue and are unleashed at once when game is unpaused. Not game-breaking by any means, and I actually found them hilarious.

Perhaps I neglected to say that everything I described above applies only to arcade mode when playing as “The girl”. Needless to say, there is a great deal of customization available if other play modes are your strong suit.

The biggest inclusion is the “Customize” mode. In here you can tailor your experience by modifying certain mechanics of the game. You can change the method of acquiring soul gauge from grazing into attacking enemies, you can also change the way of activating the second Soul Collect into a second soul bar instead of having to use a bomb, and you can even change the lives system to work as HP or the traditional lives where you get your bombs back after each death. They change the way the game is played substantially, so mix and match to your heart’s contempt.

Perhaps my favorite mode is the Boss rush. I know many people hate them, but personally I love them. I already praised the boss encounters, so having a mode where it is only boss encounters is a blast!

The last notable mode is the hardcore mode. It serves as Shikhondo’s 1CC game mode. Oddly enough, you get a game over for being hit once, but you are free to continue as much as you’d like. Your score is reset, but at least it lets you continue in case you want to practice a further section.

If you are looking for a modern shmup to play and like the japanese folklore, then Shikhondo is definitely your game. It makes for a very simple game to dive in by being a pretty straight forward entry in the genre. I was surprised by how much time I spent playing Shikhondo. It is currently ranked among my top 3 Switch shmups, and that says a lot considering the other 2 are Danmaku Unlimited 3 and Ikaruga.