I was a little bit late to the smartphone party. Surviving with older phones from relatives was a ritual I endured up until 3-4 years ago, when I was finally able to afford a smartphone of my own. Naturally I was eager to get it and play all of the mobile goodness that I have been missing for some time now. I tried many different games from online rankings, but there was one title which became a staple of my game library: Danmaku Unlimited 2. I can honestly say that no other game has been part of every single smartphone I’ve owned except Danmaku Unlimited 2, a game that combines beautiful visuals, addictive gameplay and very low disk space. Knowing there was going to be a Switch version excited me beyond belief, and I can now say that it is by far one of my favorite purchases!

Danmaku Unlimited 3 (DU3) is a bullet hell shoot ’em up (or shmup for short) created by Doragon Entertainment. Bullet hell shmups, or danmaku, are games where all the enemies try to take you down with an obscene amount of bullets on screen. Unlike traditional shmups, Danmaku games require strategy to take down troublesome foes, as well as finesse to weave through the enemy bullets. Danmaku games are extremely hard, but also very rewarding when you finally manage to reach an expert level of play.

Unlike other Danmaku games, Danmaku Unlimited offers an accessible experience for players of varying skill levels. With difficulties ranging from Easy to true, there is an appropriate challenge for every player. Easy feels a lot like classic shmups from the SNES era like Aero Fighters, sporting a healthy balance between dodging bullets and prioritizing mini-bosses. As you raise the difficulty level, you start feeling the Danmaku heat and your eyesight shifts from watching the enemies to protecting your ship. The jumps between difficulties are definitely felt, but at the same time feel like an appropriate ramp up in challenge. 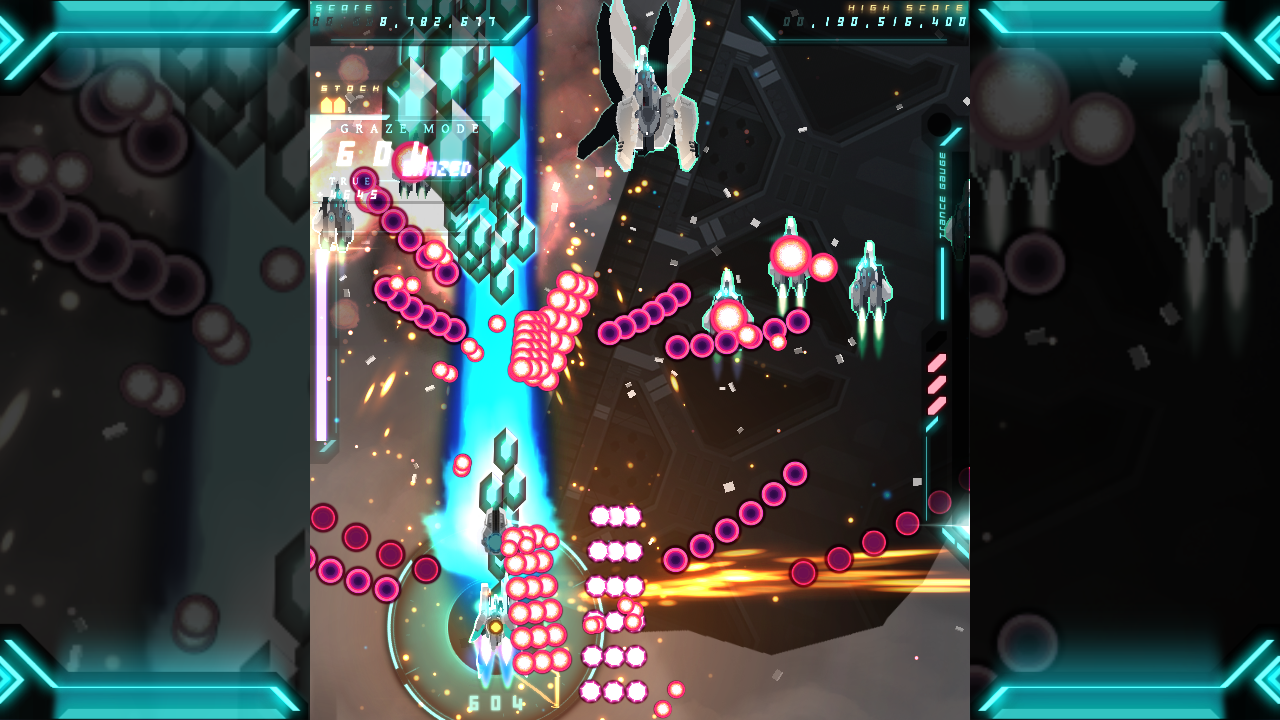 Watching curtains of bullets on screen feels intimidating, but as with most Danmaku games it doesn’t feel punishing or unfair. The biggest thing to know is that your ship is not really your hitbox. Intuition from other games might make you think that contact with the bullets will take your life, but the only exposed part of your ship is the core, which is the glowing orb in the center of the ship. As far as dodging goes, you can move your ship around bullets as much as you please, if you make sure that no bullets actually touch the core. This is crucial to passing between the small openings that the bosses leave for you to dodge.

Bullet hell shmups offer a good amount of quality of life decisions to help you, and Danmaku Unlimited 3 is no exception. For shooting you can alternate between your primary fire and your focused fire. Primary fire offers a wide range and allows you to move at high speed to dodge waves of bullets. Focused fire has a lock-on effect on the enemy and also slows down your move speed considerably, perfect for careful movements between the enemy patterns. Another useful QoL feature is that you can always see where the boss at the bottom of the screen. Higher difficulties have you focusing more on your ship for evasion, so seeing where the enemy is without looking at the top of the screen is very useful.

In terms of gameplay, DU3 plays like a classic arcade game. You have to go through different levels, clearing waves of enemy fighters until you reach the boss of the level. Each session gives you 3 lives and 2 continues, with which you need to finish the game. Run out of these and it’s game over for you! Luckily you don’t always lose lives whenever you are hit. As an addition to your arsenal, you can use bombs which are very useful for clearing bullets on screen. By taking damage, your ship will automatically use a bomb and clear the screen, making bombs pseudo extra lives. Of course, once you are out of bombs you will lose a life the next time you are hit. 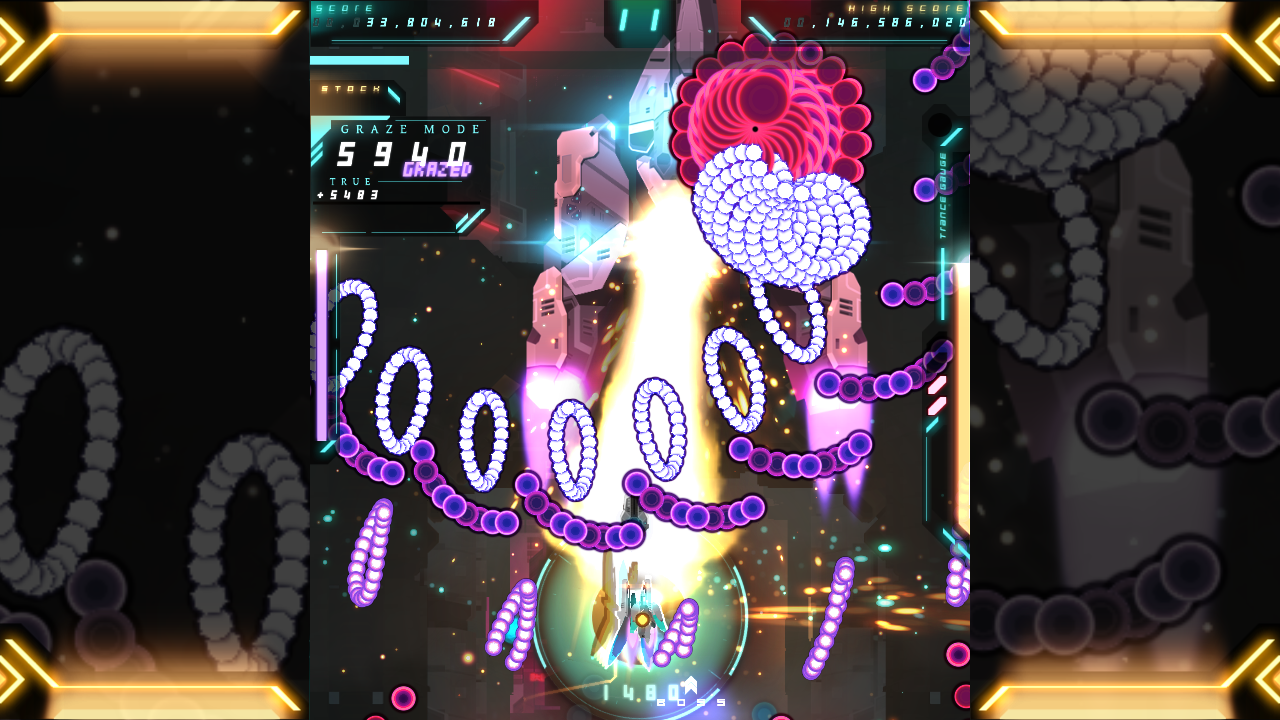 Bigger, badder and with more bullets too

Boss fights in this game are the most hectic combination of being chased by a wolf, and being chased by a bear. Amidst the rain of bullets that are coming your way, you can clearly see the intent of the boss. The expressiveness of the bosses is one of things that impressed me the most. There are two distinct patterns a boss may have. The first pattern is a chill, skill intensive barrage that you must survive. Afterwards you can see a yellow-ish flash on the screen and very brief Japanese symbols that let you know that the boss is not fucking around anymore. It feels strangely rewarding to survive one of these hardcore moments, only to be rewarded with a lesser hardcore pattern. It feels like High Intensity Interval Training where you get this butt clenching moments, then a little rest, then it’s back to the game!

The best thing about shmups is, of course, getting high scores! Depending on whether you are a beginner or an advanced player, you can pick between one of two scoring modes: Spirit or Graze. In spirit mode, you can increase your score multiplier by passing close to enemy bullets, this is called “Grazing”. When an enemy is defeated, all of their bullets become spirit bullets, which are blue and completely harmless, but can be collected to further increase your score multiplier and fill up your Trance gauge. Trance is a super powerful state you can activate to increase your firepower. Trance also turns defeated enemy bullets into gems instead of spirit bullets, which further increase your score. In spirit mode getting high scores is all about maximizing the spirit bullet grazing and going into trance for massive score bonuses.

Graze mode is the advanced scoring system, but also the one that feels more like a classic shmup. Unlike spirit mode, defeated enemies do not leave spirit bullets, so any bullet is left on screen even if the source enemy is defeated. This allows you to focus more on grazing every bullet you see. Graze enough bullets and you will enter “Graze high” which temporarily makes the enemies create spirit bullets when defeated. Graze mode requires higher skill to enter trance mode, but the elevated risk/reward mechanism for grazing directly translate into higher scores. 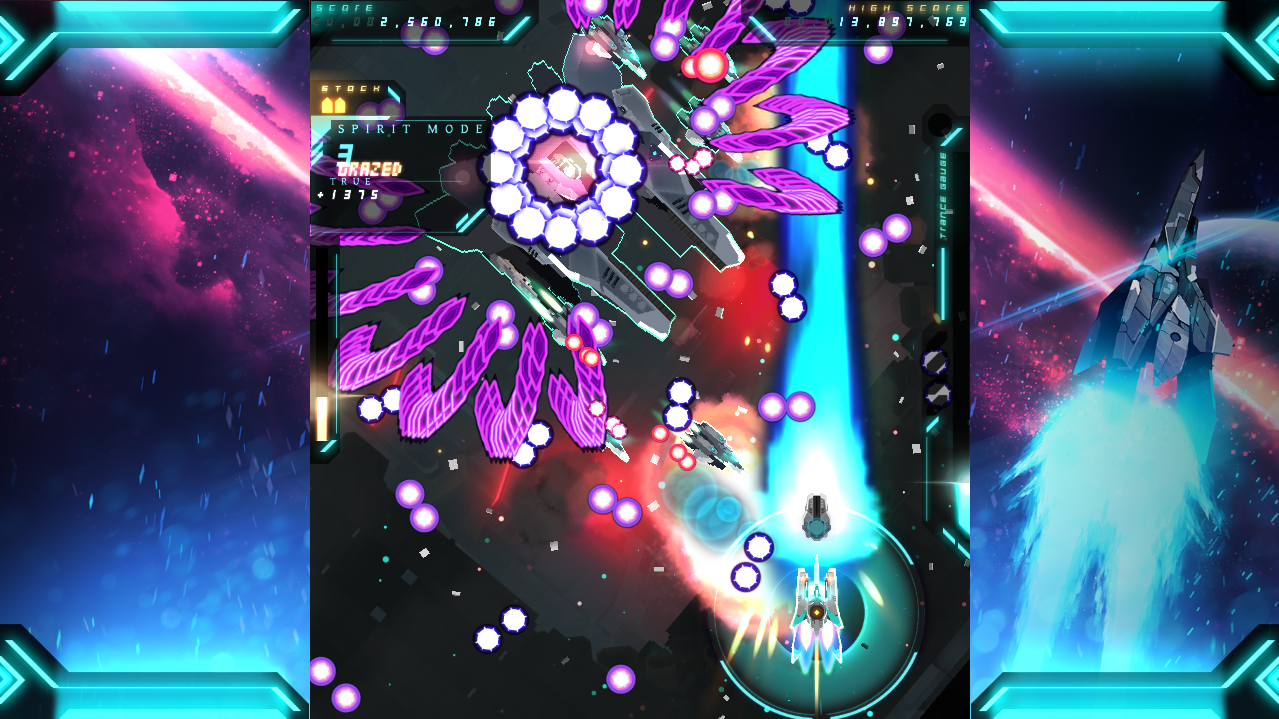 There are other ways to play besides Arcade mode. These extra modes are Boss Rush, Free play and Boss free play. While all 3 are pretty self-explanatory, it is important to mention that Boss Rush has its own scoreboard, so if you want to go for high scores without having to play regular levels, then this mode is for you! The free play modes are designed for practice, which far from being trivial, is actually pretty important in order to clear the harder difficulties.

Danmaku Unlimited is not only a game that plays beautifully, it also looks and sounds like a masterpiece. The visual are 3D models which look extremely clean of the screen. Bullets are also colorful and come in different shapes, they also blink which make them incredibly easy to spot. The color palette makes it really easy to differentiate bullets from everything else. I’ve never felt like I’ve been hit by a bullet that came out of nowhere, or which was hidden between everything else going on screen. The soundtrack by Blankfield is perfect to accompany the action from the game. It accompanies the action and follows the hypest moments with its beats.The soundtrack is a perfect fit for the game, and luckily it is also available on spotify. You can bet I listen to it frequently while at work or at the gym.

Perhaps my favorite new feature from the Switch is the video capture mode. Video capture is limited to certain games that have it implemented, and it is a feature that is absent in many indie releases. This is definitely not the case with DU3! I was extremely pleased when I pressed the capture button and learned that I could save videos from the game. Many skill intensive game releases benefit from video capture, and I am really happy that I can capture my best panic moments in this game! 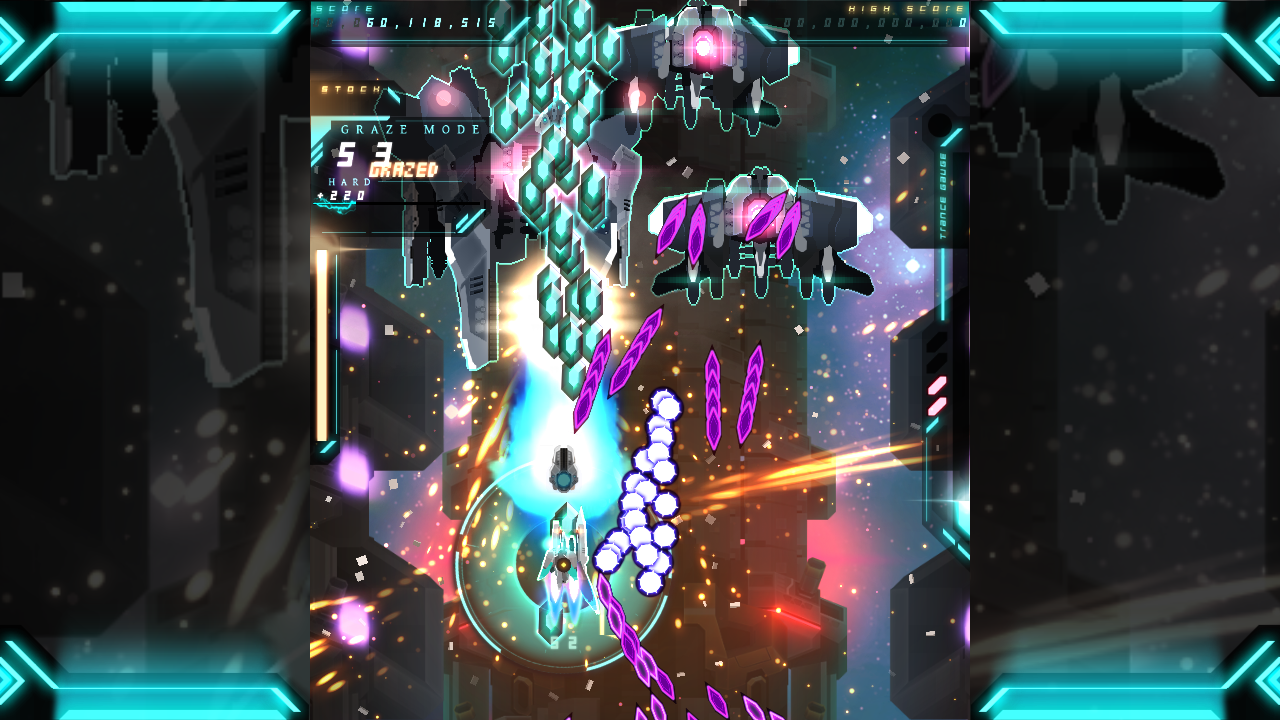 The very best niche game your money can buy

I am a huge fan of shmups, and Danmaku games in particular, so it shouldn’t be a surprise that I think so highly of this game. What I do have to mention, is that among all the shmup games I played, this is definitely Top 2 in my personal list! This game does so many things right, and absolutely nails every aspect of the gameplay, the visuals, the music, and even the TATE mode for those who like to set the console or TV in a vertical way.

Danmaku Unlimited 3 is by far my safest purchase on the Nintendo Switch, with it being extremely affordable and also taking so few storage space on my microSD card. The only nuance I can think of this game is that the genre is pretty niche and not for everyone, but if you are part of this niche and enjoy shmup games, then this is a 100% must-have game.

The double standards are crazy.

"LOL the Switch only sells ports of old games"

"OMG PS+ Collection! Sony is a god for giving us PS4 games at launch!"